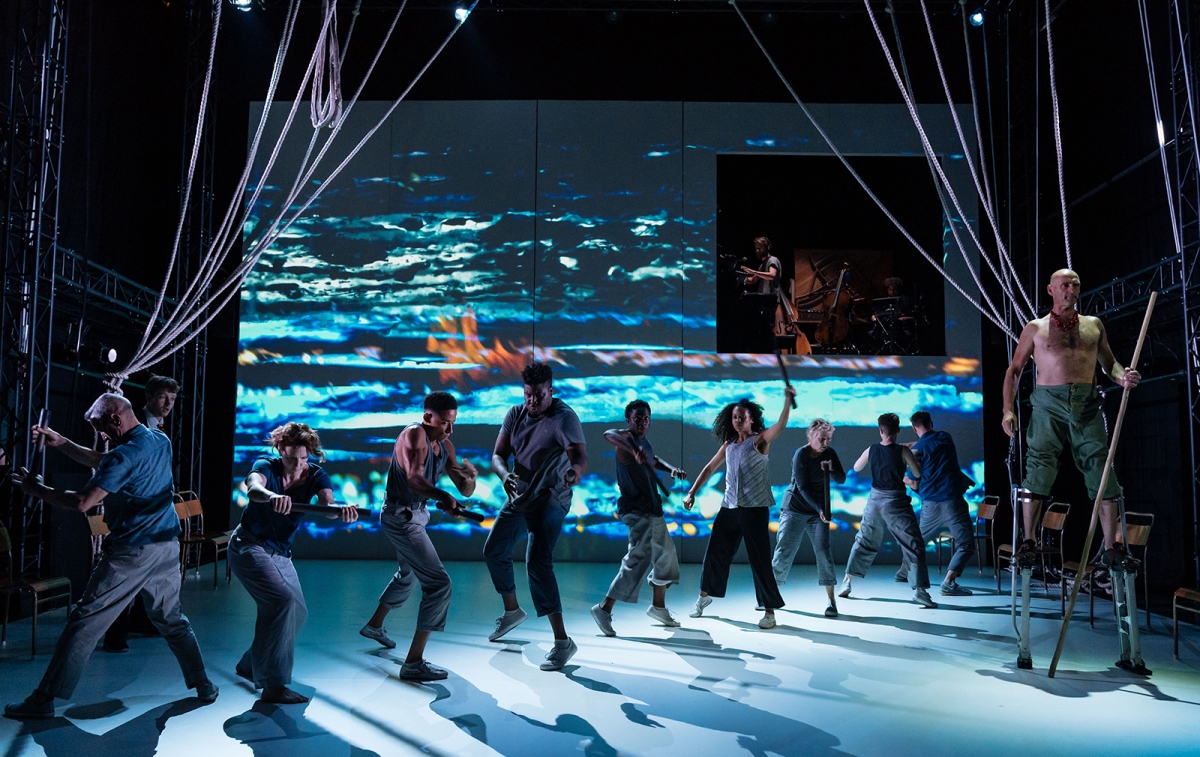 I’ve done a lot of crying over this story.

First on a train as I pulled into a local station, red-eyed, having feverishly rushed through the last few, devastating pages of the book on the way home. Then at the London Film Festival, where I can only assume that the last twenty minutes looked as beautiful as the rest because I was viewing it through some sort of blurry waterfall. So I have history with A Monster Calls.

Still, I had to wonder how the the creative team setting up shop at The Old Vic was going to cope with the mixture of mundane school settings and storytelling flights of fancy. For 13 year old Conor O’Malley, watching his mother struggle painfully through cancer treatment, the promise of salvation comes as a mysterious, terrifying monster emerges from a yew tree  – always at 12:07 – and demands an exchange. The monster will share three stories of the times it has come walking. In return, Conor must then tell his own story – and it must be the truth, or he will be destroyed by it. In the meantime he has to deal with bullying at school, a fleeting visit from his distant dad and the frustrating presence of his buttoned-up grandmother.

Sally Cookson’s gloriously kinetic production strips back the stage to nothing more than a dozen performers with chairs, a handful of props and a hanging cluster of ropes. Judicious use of projection and a strong live musical presence – occasionally visible to the audience – make things feel eerie, jarring, dream-like throughout. The ropes constantly twist to take new forms; it’s repeatedly the yew tree from which the monster emerges – bare-chested, berries around the throat, Herne the Hunter on stilts –  but also a seat belt, a queen’s crown or the pendulum of a relentlessly ticking clock. At school, where Conor angrily resists all sympathy, things are simple, ordinary. At night, wracked by nightmares, piercing projections meet choreography that flips and shifts through painful, grimacing shapes. And in the fantasy world of the monster, dance both on stage and through the air joins eerie music to transport us, temporarily, elsewhere. Other than Matthew Tennyson’s Conor, all other members of the cast move in and out of the ensemble seamlessly; one minute Conor’s dad, the next holding a kettle up to represent a quiet suburban kitchen.

With a running time of two hours, A Monster Calls takes all the space it needs to develop its story, and so succeeds in planting the seeds of hope among the ashes of devastating loss. And it wears its heart on its sleeve; not only in terms of the deeply emotional core of grief and guilt, but in the physical theatre influences that echo through it (Theatre de Complicité springs to mind). Just as the monster demands total emotional honesty, so the production never hides its intent to engage, to teach and, crucially, to move. By the time the final, difficult scenes take shape, there are few dry eyes in in the house.

There are just a few weeks left to catch this beautiful piece, which finishes its run at The Old Vic on August 25th; I suggest that you try to do so. Suitable for ten years and over (please take advice from the theatre about lighting and photosensitivity, as some scenes could be triggering).

Disclaimer: I received two press tickets to attend this production; all thoughts are, as ever, my own.