I don’t have as many funky baking gadgets and gizmos are you might expect, mostly for the following three reasons:

But from time to time I feel I need to give in and get something a bit pointless that I won’t use very much but that will let me get creative in the baking department. Especially if it’s not too expensive. This lead to me splashing out a whopping £6 on Miniamo star-shaped mini molds, that can be used for baking or setting a liquid in the fridge. It was a spur of the moment decision made in a baking shop; you can undoubtedly find them cheaper online.

My first thought was to make mini star shaped cakes in a contrasting colour-  perhaps vanilla-based cupcakes with red velvet star shaped cakes on top. Then I thought about how to embed a star shape in the top of a cake, and the experimentation began…

I switched from Rachel Allen’s red velvet recipe to Hummingbird Bakery‘s, mainly because the latter had already been adapted (cooking time and temperature) for cupcakes. I’m glad I did; lovely as Rachel’s is, the Hummingbird cupcakes were undeniably fluffier and, as the recipe calls for more colour, a richer and more tempting red.

The experiment was, taste-wise, a success. However it wasn’t perfect, and I’ll explain what I’d do differently next time as I go through… 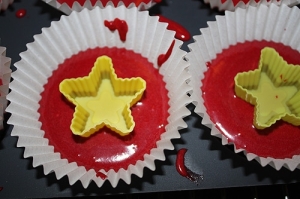 Once I’d made the mixture, I pushed in the molds delicately in the centre. I had thought that delicacy was wise, since I didn’t want the mold to a) sink to the bottom or b) get so deeply stuck in it ripped the cake apart when I removed it. However, I was a fraction too hesitant, as you’ll see from the next picture… Next time, I would push the mold in a little further and possibly weight it with a couple of baking beans or similar. 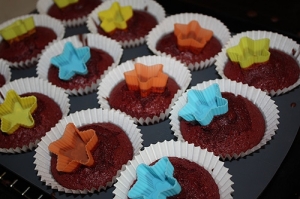 The more hesitantly applied molds – and possibly less evenly poured in batter – resulted in some cakes with rather random angles at the top, and also one or two whose indentation was too shallow. Contrary to this dreadful photo, however, some did come out rather well, as you’ll see below! 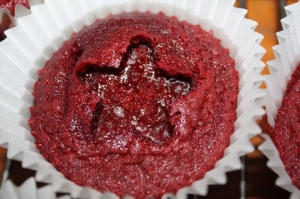 This was one of the best ones. Please note that you have to wait until the cakes are at least 90% cool before removing the molds. If you don’t, it will just get really shredded around the edges. I suspected this, so I tested on which became the ‘sample’ cake (don’t pretend you’ve never done that). And it was genuinely in the spirit of experimentation rather than impatience, for once! The good news is, between baking and cooling you’ve got masses of time to melt some white chocolate and half-fill some molds with it. I bought 24 so I could bake 12 and prepare 12 toppings at the same time, but you could wait, wash the molds and start from there.

Oh, and a tip about cooling chocolate; it will get far less gloopy if you cool it at room temperature before finishing off in the fridge. 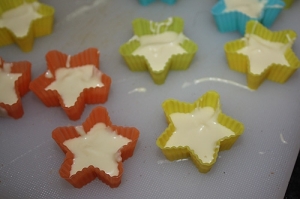 Then, when set, pop them out and, handling as little as possible, press them into the indentation left in the cake! 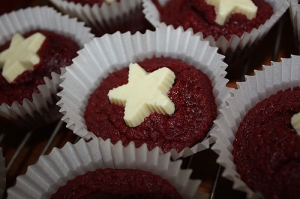 Again, I would have liked the chocolate to be a little deeper into the cake – possibly even flush with the top for a quite dramatic look – but given the cocoa base for red velvet cake the two went together very nicely and the stars added an element of creaminess without the sickly edge that a huge hunk of buttercream or cream cheese icing can give (and it says something when white chocolate is less sickly than pretty much anything else. I guess it’s the amount!).

Maybe I’ll find time during maternity leave to do more baking. Then again, a first time mother with a newborn? Maybe not.