I’ve found myself rather missing this blog. I can’t tell you how many times I’ve crafted blog posts in my head lying in bed at night but not actually released them into the world. Mostly it’s just plain tiredness; sometimes it’s because I save it for BitchBuzz. I’ve been so terrible I haven’t even linked over to my posts there, but I am still writing about babies and parenthood and stuff bi-weekly on a Wednesday so if that interests you a post will be up tomorrow. I have two ready for publishing, so it’ll either be on things to keep in your nappy bag or dealing with phases.

The latter is what my reflection is all about today. Phases. Specifically, shrieking. I’ll leave the details to that post, but basically she’s in full-on screamy phase where everything seems to need to be accompanied with high-pitched, ear-damaging yowls. There are all sorts of reasons but primarily I think it’s teething. We’ve given her frozen rubbery teething rings and have been recommended chamomilla (haven’t tried it yet) and Anbesol liquid (reasonably effective). To top it all she has a manky cold, and teething makes her nose run anyway, so she’s definitely not her jolly self at the moment.

That said she still does manage to bounce vigorously up and down in her ‘doughnut‘. And we had a lovely first Mother’s Day together, which I will treasure always (that photo was taken that day). She got me a beautiful copy of The Hunting of the Snark, illustrated by Tove Janssen. Amazing taste in one so young.

The frustrations I’ve spoken of before aren’t quite gone. She can feed herself some things, use her cup independently to drink water and eat more complex food, which is great. She can stand, wobbling, holding on to the sofa. She can right herself if she’s slightly reclined. But she can’t crawl, doesn’t enjoy being on her tummy for long and is not quite able to sit up from lying down flat. This leads to a lot of grumping, and I have to balance helping her out with encouraging her to try and do it herself. She’s a bright spark – alert and observant – and that can be the problem sometimes. There’s so much she wants to get into and she can’t yet, and it makes her grizzle.

On the other hand, she’s yammering away now – da-da-da, ba-ba-ba, ma-ma-ma – and imitating sounds she hears. “Casper!” I called to the cat. “Ath-puh,” came a little sound from beside me as she played peacefully. I’ve started to get more consistent with certain signs, such as ‘milk’, ‘drink / water’, ‘cat’, ‘hello’ and ‘finished’ and although again she mimicks them from time to time I don’t think she’s really got it yet. Still, it should help with the communication. And said cat is very tolerant of her and hangs out with her, even going so far as to curl up on her feet during one nap time. 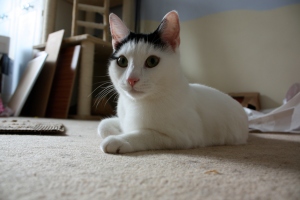 When I wrote my last post, I was still too distressed from the events of the day before to focus on what had happened on here. Our first cat, Snaffle, a little less than three years old, collapsed suddenly. Despite my rushing him to the vet within 20 minutes, less than two hours later he’d been euthanised. The cause of the collapse had been a very unexpected heart attack, complete with blood clot cutting off the circulation to his legs. There were no prior symptoms and he had always seemed the epitome of a healthy cat.

We miss him a lot.

It makes me sad that Ramona will never know him. But she’s already developing a sound friendship with Casper, which I’m enjoying watching.

Right. Nap time has already been disturbed once for a milk top-up and soothing, so I’d better stop with the clattering typing…