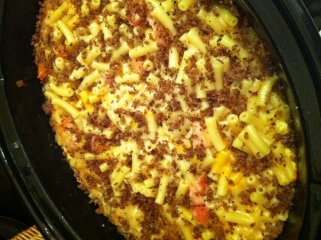 I was going to write a post declaring how very stupid it is that someone has developed something very similar to Pinterest and is trying to make its USP that it’s ‘built for men’. But, really, if you can’t instantly see how stupid that is, then I’m not sure I have the energy to try and convince you. (But seriously: 58% women is too much for some men? Do they know that they world is 50% women already? Do they realise how badly represented women must be for just a few extra to freak them out so much? Should we all just sign up when we can and post nothing but pictures of Barbie dolls just to annoy their mods?)

Ahem. Instead, I’m going to talk about how Pinterest led to macaroni and cheese. Ah yes, women talking about food! Because women belong in the kitchen, right? And therefore Pinterest is for women! Keep walking…

(And if you hadn’t noticed already, the catering industry is phenomenally male-dominated. Take a look at this list of Michelin-starred restaurants  or even just watch a single episode of MasterChef in any country and tell me otherwise.) 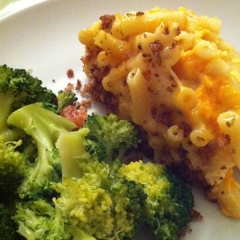 The Good: cheesy, cheesy tasty goodness. And because it’s not a strong-tasting meal in the first place, the slow cooker can’t really reduce the favour. Also, no stirring! I stole the idea of adding some tomato and oregano, which was lovely, and also the toasted breadcrumbs on top.

The Not Quite So Good: I doubled the recipe to feed six people and got the timings off, so I left it too long and it became a ‘set’ mac and cheese instead of gloopy. Still totally edible, but not quite as comforting. I like something in-between stove-top gloop and totally set, for preference.

Of course, I dished it up with the best possible accompaniment for macaroni cheese: broccoli. Cooked al dente. And Ramona loved it, so despite my mistakes, a win all round.