I never used to eat mince pies. Dense, squidgy, oversweet… in the great list of Christmas desserts I was uninterested in, they ranked just below Christmas pudding (which I’m still so-so about) and just above Stilton (which I’ve totally come round to in my old age). And then my sister moved to Leeds and we developed more than a passing acquaintance with Bettys… and I finally found out what a really, really good mince pie tastes like.

I found myself tweeting about this the other day, and Bettys – doing some excellent monitoring, as I would expect from the team that complements the brilliant Yorkshire Tea feeds – picked this up immediately and followed me. On following back, it turned out I was their 600th follower, and they very kindly offered me some mince pies to review. How on earth could I say no?

The mince pies duly arrived – 12 gleaming beauties in an elegant little box (usually £9.50 and delivered around the UK) – and I managed to eat at least five of them while still giving the vague impression that I was sharing them with other people.

And then my Riverford box arrived, and the little weekly insert – one of the highlights of the whole procedure, these proud yet melancholy missives from Guy Watson, with the slightly mud-streaked recipes on the back – was so convincingly effusive about Watson’s brother’s mince pies that I began to wonder if there could possibly be a challenger to the Bettys crown. Plus, in order to be a truly honest review, I felt I needed something to compare them to. Riverford’s pies are award-winning and the company is beset by offers to mass-produce, which are declined so that they continue to be made by hand; one of the chosen testimonials celebrated their ‘wonkiness’ and how they were the best bet for faking it if you didn’t have time to bake!  I was sold and hit the button to buy a £4.95 box of six.

And now… the verdict. 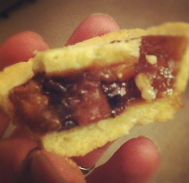 What makes these mince pies such Christmas classics? Well, for one, they constantly tread the perfect line between elegant and twee: pretty but not fussy, generously deep but not oversized. I also love that they’re not sealed, so there isn’t an overwhelming mouthful of butter to plough through.

But my very favourite thing about them is their filling; it’s quite a soft mixture – a delicately spiced liquid studded with fruit rather than a dense raisin sludge.

Finished with a little icing sugar and a star-shaped shortcrust topping, these are outstandingly moreish, and thoroughly delicious. 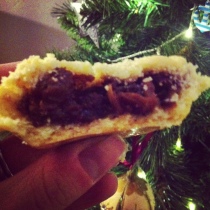 Even at first glance, these are quite clearly a different beast. Almost oversized, flat and fully sealed in quite thick pastry dusted with granulated sugar, they really do look pleasingly hand made.

The filling is rich, densely packed and slightly more heavily spiced. The pastry can only be described as unctuous, being so outstandingly buttery as to be a little overwhelming, especially as they are very large… but I still managed to put away two in a sitting!

Definitely needing a big glass of water or a soothing cuppa, these are incredibly indulgent, and very, very good.

And the winner is…

For me, Bettys just has the edge. It really does come down to personal preference, and the hint of refinement in Bettys’ pies means north takes the crown over south (something this London-born woman doesn’t say that often).

It’s just as well I’m heading to Yorkshire over the Christmas holidays, really.