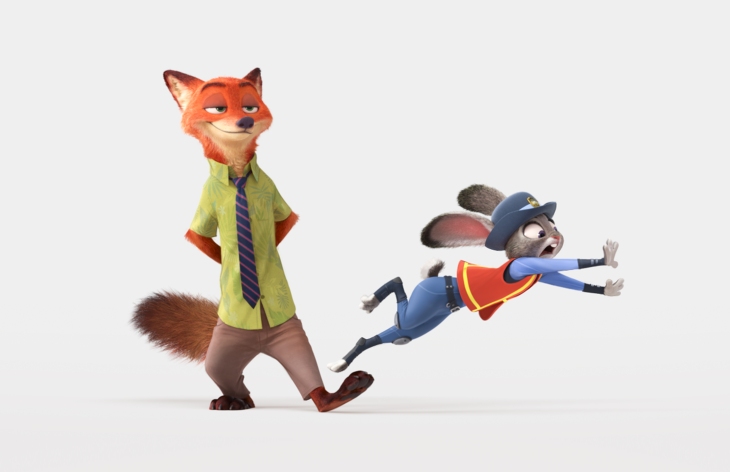 Why didn’t anyone tell me this was Pride and Prejudice with added Breaking Bad jokes? Also, sloths. Somehow much of the build up to the release of Zootropolis passed me by, but now that it’s landed I couldn’t be happier.

Walt Disney  Studios’ latest blockbuster opened to greater success at the box office than Frozen and yet has precisely none of the hallmarks of what most people probably think of as classic Disney: it has a non-princess female lead, it isn’t a musical and there’s no love story. And yet it is unquestionably  Disney in tone, with all the characterisation, humour and heart that Disney has come to stand for, plus a dose of the more ambitiously groundbreaking attitude Disney animation has had since Pixar chief John Lasseter took the creative helm (in fact, I’d argue the Disney team has knocked out more world class game-changers than their colleagues at Pixar have in the past five years, despite popular opinion casting Pixar as the creative leaders).

Zootropolis – the UK name, though Zootopia makes more sense – shares a good deal of tone with one of my recent favourites, Tangled. Judy Hopps (Ginnifer Goodwin) is a wide-eyed, innocent yet determined bunny from the countryside, full of beans but just a touch sheltered and naive. As the first bunny police officer in heaving Zootropolis, the place where predator and prey have apparently learned to live side by side in perfect harmony, she faces stereotyping and sidelining by the cynical chief (Idris Elba) – but she grits her carrot-chomping teeth and plans to work twice as hard to show how good she is. A bewildering investigation leads her to team up with professional hustler Nick Wilde (Jason Bateman), an embittered fox determined to prove that if sly is what people expect from him, then sly is what they’ll get. In a world that’s supposed to lack species tension, Judy and Nick set out to track down a group of missing animals – and discover there’s a lot more mutual suspicion bubbling under the surface than Judy, at least, had anticipated.

Bright, funny and great for almost all ages, it’s a classic buddy movie with a timely, complex message about the nature of prejudice that deftly avoids the thundering cliche of all being the same under the skin (the point is not being the same, but being equal). There are some audaciously direct references to all sorts of ‘isms’ – Judy’s reception as the minority candidate reeks of everyday sexism and tokenism; Nick obnoxiously squeezing a sheep’s hair and commenting on its texture made my jaw drop. At various times both predator and prey are shown as being fearful and ignorant and – though I’m not a believer in ‘reverse’ prejudice, since the balance of power is usually pretty obvious – the message that fear is damaging to everyone is powerful. Pointedly, the film dares to point out the hypocrisy in thinking you’re being the perfect, outspoken ally while spouting prejudice and holding on to negative perceptions without even realising it. It shows the specific, personal cost of not practicing what you preach. And if audiences like me, who fit several privilege groups, feel a little uncomfortable, then that’s as it should be.

What makes Zootropolis hugely enjoyable as well as audacious is a good dose of humour; witty and sharp, with plenty of over-the-kids-heads jokes, it also has a number of great visual gags and in-jokes. My five-year-old was highly amused by some knock-off DVDs (Pig Hero 6, Wrangled) though she missed that they were being peddled by a Duke Weaselton – come on, Frozen fans – voiced brilliantly by Alan Tudyk (come on trivia fans). A very earnest story is rattled out through a succession of one liners and smart characterisation, and even the key emotional appeal in delivered through the useful shorthand of an all-too-familiar celebrity appeal (oddly sexy Gazelle, voiced by Shakira channelling Lady Gaga). There’s no heavy-handed worthiness, but plenty of goodwill.

I strongly suspect that Jennifer Lee, who contributed to the story, had more influence than the credits suggest in turning out a balanced narrative – between her princess-subverting Frozen, which she also co-directed,  and the outstanding Wreck-It Ralph , she’s shown over and over again that she’s willing to take stereotypes, particularly sexist ones, and turn them on their heads. That the production team flipped characters during production to make Judy the lead, rather than Nick, shows that the studio is beginning to understand what it needs to produce films that are more inclusive; that very realisation is at the core of what makes Zootropolis such an honest and engaging film.

The five-year-old’s verdict: Despite giggling aloud at plenty of the film – we’re still hearing about the sloth, days later – being quite a sensitive soul she was also scared by some snarling animal attack moments. For that reason she isn’t sure she’d like to see it again, though her cousins, another 5yo and a 10yo, both thought it was fantastic and really funny. I think there’s a mild warning in it for easily scared types (and it is a PG, not a U) otherwise I’d say it’s a rollicking family adventure with an important message.

Zootropolis is on general release from Good Friday, 25th March.

Disclaimer: The Disney UK team kindly provided five tickets for me and my family to view the film. All opinions are our own.