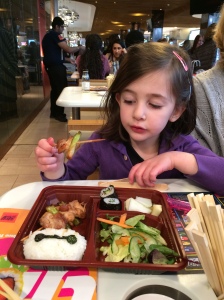 (For my review of the film, pop over here)

Children are often a peculiar mix of heart-stopping fearlessness and weird phobias, and mine is no different. Although given half the chance she’d be an unrepentant square eyes for huge periods of the day, she’s very up and down about new films and tends to be a bit wary of the cinema. This weekend, I tempted her into a viewing of Big Hero 6 using popcorn as bribery and the promise of a little reward afterwards if she was brave; it was also our opportunity to use a Yo! Sushi voucher we’d be given for a themed meal, and she was already proudly wearing a yellow GoGo Tomago wristband.

These were her reactions:

“That was funny when that robot hit that man in the face!”
“Wow!”
*waves her arms around dramatically* “I’m being GoGo Tomago – like on my bracelet!”
“Imagine if you could fly like that, Mama…”
“Is ‘Lemon’ Honey’s last name?”
*lots of giggles*
“I thought that was really COOL!”
I’d primed her that she could look away or duck out if it got too much for her, but she only dived into my arm once, for less than a second, at a close up on the villain’s slightly creepy kabuki mask.

Afterwards, we popped into the Disney Store, where she chose a small Honey Lemon figure to play with (not the one below). I’ve mentioned before that the women of Big Hero 6  are in general more diverse and widely represented than in previous films; having my daughter play with in a brave, kind Latina scientist who is applauded for what she does, not how she looks, feels good. Casting an eye over the shelves was also reassuring – although Frozen and Marvel superheroes were at opposite ends of the store, all the Big Hero 6 merchandise was together, female and male characters mixed up, with the women shown in action poses on the packaging. I was pleasantly surprised to find a journal set with Honey Lemon on the cover that wasn’t sequinned or pinkified. GoGo’s doll figure was sold out this time, but I’ve seen it before with properly built up leg muscles to reflect both her animation and the fact that she’s a runner and cyclist. When you visit the website, the t-shirts and pyjamas are simply labelled “for kids” (and FYI Disney, this adult would LOVE a Baymax t-shirt if you’d consider sizing up in the UK and not just the US; maybe not this one though, given my proportions…). 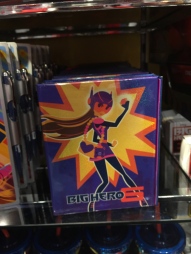 Disclaimer: This was just a family day out, but the Yo! Sushi kids’ meal was courtesy of the screening goodie bag at which I first saw the film.

By now, it’s likely you will have seen posters featuring Baymax, a portly inflatable robot, and probably watched the trailers of him footling gently behind a football that remains just out of his reach. The question, of course, is if this evidently charming and unlikely superhero’s sweetness can provide a solid core for the latest Walt Disney Animation outing- and the first to use one of their Marvel properties.

In a word: yes. In a few words: a thousand times yes. Baymax (voiced gorgeously by Scott Adsit) is a beautifully realised creation – a ‘personal healthcare companion’ created by idealistic nerd Tadashi Hamada and inadvertently bequeathed to his younger brother  Hiro  (Ryan Potter) after a terrible tragedy. Baymax’s relationship with a slowly recovering Hiro forms the essential core of a film that – while it has many fast-paced sequences and explosive exchanges – is in many ways a tender love story. It packs in the brilliant irreverence and humour of a Marvel adventure, but tempers it with lashings of heart. In fact, what it reminded me of most was ET. 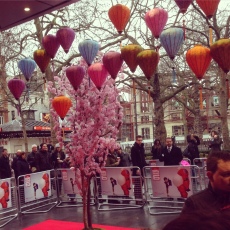 The beautiful setting of San Fransokyo, a near-future East-meets-West mashup, is somewhere I instantly wished I could visit, crammed with touristy cable cars and cherry blossoms but also with a seedy backstreet or two so that it felt just real enough. Hiro’s life is also a welcoming mixture of the mundane (familiar forms of transportation) and the ridiculous (his carbon-fibre 3D printer). The film eagerly champions geekery and also acknowledges the inevitability of failure; at some point every character finds themselves in a bind they have to think – not just blast – their way out of. And there are plenty of fanboy references to keep the nerdiest fan entertained (I can’t have been the only person who flashed on Tom Fitzgerald’s Horizons legacy when Hiro announces of a new invention that “if you can think it, they can do it”). 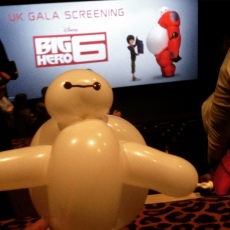 A review of this would be incomplete if it failed to mention one of the things I was most heartened by, which is that Big Hero 6 does more to advance the position of women in the Disney Animation stable than anything that has come before – even Wreck It Ralph and, yes, Frozen. The latter certainly did its bit to advance the princess narrative but in the case of Big Hero 6 there are strides made in abundance. The title refers to a superhero crew made up of a ragtag band of nerds from a university science programme; two of them are female, and each in her own way defies expectation. While Honey Lemon (Genesis Rodriguez) is fond of stilettos and pink, she is also obsessively pedantic about science and unashamedly smart and capable. Speed-obsessed Go Go Tomago  (Jamie Chung) bats the boys out of the way, demonstrating her impressive physicality and barking at them to “woman up”, but never becomes a Strong Female Character stereotype, showing a full range of emotions.

This trend continues outside the heroic sextet. Hiro and Tadashi’s Aunt Cass (Maya Rudolph), raising them since the loss of their parents, is a loving parent but not necessarily a natural one; she also sinks time, passion and love into running her own business. Dropping in to Tadashi’s lab for the first time, Hiro ambles past quite a few women tinkering away alongside the men – and a number of experienced scientists featured in the film are female. Best of all, I’ve already noticed this reflected in the merchandising, with the female characters displayed among the men, in fighting poses, and with their physical features represented – such as Go Go’s muscular legs. And as for the boys? Well, most of them are shown as eschewing unnecessary violence, offering affection and exhibiting fears; my favourite, Wasabi (Damon Wayans, Jr) is a welcome and genuinely funny mixture of insecurity and swagger.

Given that this balance is at the core of each character, its no surprise that the real power of Big Hero 6 lies in its essential humanity. Every element of it is rooted in relationships – in love, in loss, in revenge and in redemption. These are weighty themes for the most youth-focussed of Marvel outings, but in many ways the naive directness of childhood is what makes it so perfect a medium for this message.

Beautiful, smart, moving and funny; I couldn’t recommend it more.

Big Hero 6 is on general release in the UK on January 30th. It is preceded by an insanely adorable short, Feast.

Parental advisory: I have a nervous 4-year-old who needs gentle leading into some films so I pre-vet them for her. In terms of scary moments this is quite manageable; there’s a spooky-looking villain and a lot of loud fights, but no teeth-and-claws scariness. There is a great end-credit sequence worth getting through the wriggling for.

Disclaimer: Disney UK kindly provided tickets for the UK gala screening where the above funtimes were had, and there were some cute snacks provided by sponsors. Opinions are entirely my own.