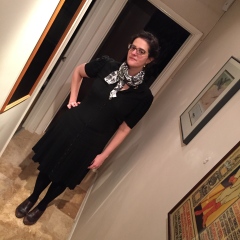 Me in my genuine 1940s premiere finery with my genuine, erm, 2015 Haunted Mansion souvenir.

For a film about the future, Tomorrowland: A World Beyond sure feels like stepping into the past. In this joyful retro-futuristic romp, The Incredibles director Brad Bird and LOST co-creator Damon Lindelof have created a relentlessly upbeat, Spielberg-reminiscent family adventure with its eyes on creating a great, big, beautiful tomorrow.

It’s 1964, and young Frank Walker is enjoying the sights and sounds of the World’s Fair, including Walt Disney’s It’s a Small World and Carousel of Progress. Everyone is looking ahead to a world of gadgets and gizmos aplenty; Frank himself is toting a new invention to enter into an innovation contest.

Fast forward 50 years, and Casey Newton (Britt Robertson), eternal optimist and tech nerd, is battling the closure of the NASA platform where her dad works and the negative attitudes of her peers and teachers, all forecasting doom and dystopia. It’s not looking good – until a strange vintage pin turns up in her possession… 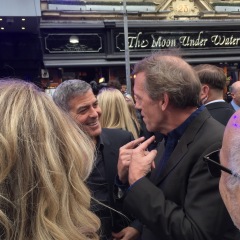 Tomorrowland (to use its simpler US title), rests on the premise that at some point post-1970 our outlook on the future went from chasing dreams to ducking nightmares. And looking at some of most popular and successful franchises around today – although, yes, dystopia in cinema is nothing new exactly – it’s hard to disagree. Somewhere along the line, our vision became more universally dim; less Jetsons, more genocide. And the disaster is invariably man-made. No meteror extinguishes our old-fashioned thinking; we’re dinosaurs on a collision course with our own greed – or worse, apathy. Tomorrowland explores what the world could be like if we rediscovered that spark of enthusiasm – and what that could mean for humanity now. But to have nostalgia for an imagined future, you have to go back to the place that future was envisaged from, and in doing so Bird has also tapped into the childhoods of his core audience; I felt more than anything like I was watching some of the classics of my own upbringing – but for the first time and without the dated haircuts. It was Flight of the Navigator, War Games… maybe even ET, only new and shiny. 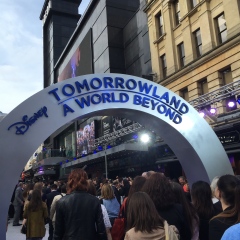 Okay, I squeed a little.

In many ways, it’s a shame to give too many details away about Tomorrowland. To me it felt primarily like an old-school family adventure movie – although my daughter, not yet five, is not the key audience, I wouldn’t actually have any problem with her watching it – but also like a film made by Disney fans for Disney fans (but enjoyed by everyone else). Certainly a ride on It’s a Small World will never feel exactly the same… Crucially, though, Tomorrowland doesn’t just revisit the past for the sake of it and then wallow in nostalgic baby-boomery; it does attempt to move the discussion along beyond rediscovery, into action. 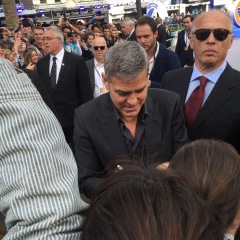 Clooney! The guy on the right = joy.

Just over four weeks ago, I was actually sitting in Walt Disney’s Carousel of Progress – and it was a really weird experience. For one, it was one of the few classic attractions I couldn’t remember from childhood; I’d completely blanked it out (or maybe we hadn’t visited? Seems unlikely, though; I remember every version of the Spaceship Earth narration since 1984 – we were that kind of family). Despite frequent updates until the early 90s, it hasn’t aged as spectacularly well as one might hope; progress by this definition largely meant technology – not people. All innovations are presented – as well they might be in view of the domestic preoccupations of 1964 – in terms of household convenience. Women are generally sewing or losing weight or gossiping on the phone, right up until the most modern, forward-thinking scene. It’s all a bit old-fashioned in a generally uncomfortable way. In Tomorrowland, the very essence of futuristic thinking is rooted in humanity, and progress is from the earth to the stars, not from the kitchen to the living room. Besides which, humanity is embodied primarily not in Frank – in spite of Clooney’s global star power – but in the body of a young female character who is not sassy or ditzy or seeking male approval or especially representative of anything other than being an intelligent teenage girl. 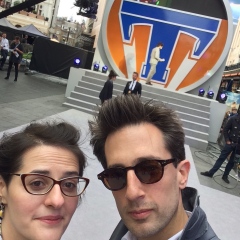 Do I look worried because Alex Zane is about to tap-dance on my husband’s head?

Better yet – and here, I shall be deliberately vague – key relationships in the film revolve around another female character, the mysterious Athena (Raffey Cassidy). Impressively she is both the lynchpin of which the emotional core of the film and its coolest, most logical mind; it is Walker’s adult male that is the most unhinged and uncontrolled. When is the last time we’ve seen that kind of dynamic presented to young girls? I remember watching what is still one of my favourite films, Jurassic Park, and being utterly frustrated that seven-year-old Lex of the book, who had good reason to be scared due to her young age, had been turned into a snivelling teenager on screen, reassured about “veggiesauruses”. In Casey and Athena we have a couple of bright, shining examples of how a female character can be a character first and female second.

Few films are perfect, and Tomorrowland has its flaws – though I’d argue that most are a direct consequence of its strengths. For one, it is so invested in character and delivering its message that plot can feel a bit rushed; fully three quarters of the film is devoted to setting up what turns out to be a pretty fast pay-off. Still, I didn’t actually notice that until later, when Ramona asked me about the story (she’s something of a Joe Friday about these things). Unsurprisingly for a movie based on a themed land from one man’s dream, there’s a strong emphasis on individual, special visionaries needed to inspire the rest of humanity that I’m not entirely sure I agree with, but it did force me to think about it. Interestingly, the villain here – Hugh Laurie’s David Nix – is not actually outright evil for the most part; to be a bad guy here is to have had the optimism kicked out of you (bad news for Eeyore, I guess). When introducing the film, Bird had difficulty defining the genre into which it fits, because there isn’t just one; while that can be jarring at times, when the film takes an unexpected turn, it’s also refreshing.

In the end, I found myself unwilling to pull at Tomorrowland‘s threads too hard because I enjoyed the whole fabric so much; it’s such a cosy blanket of positivity and hope that I couldn’t bear the thought of trying to unravel it. Also, I really, really want one of those badges.

Disclosure: To make the entire experience altogether more amazing, I was privileged enough to be able to see it at the European premiere, where I edged past Clooney and Laurie on the blue carpet (sadly nowhere near Bird, of whom I am entirely in awe) to the strains of There’s a Great, Big, Beautiful Tomorrow whilst wearing my favourite vintage dress and a Haunted Mansion scarf because apparently I CAN DO THAT NOW. I am very grateful to the lovely team at @Disney_UK who invited me along and made my week. However, I can assure you the thoughts above are entirely my own (and indeed, who else would want to claim them?).

Update: I’ve had MOAR THOUGHTS about Tomorrowland, and specifically the feminism and insight therein But there are spoilers. So tread carefully.