I thought I loved tea, and then two of my best friends came to stay. And now not only do I love tea, but I’ve radically evolved the way I drink it, with an ever-increasing list of favourites for different occasions, moods and times of day, and the ever-decreasing use of milk. I was always pretty straightforward – dash of milk, no sugar, because sugar in tea is an abomination unto Nuggan – and happy with a teabag. I still find myself able to drink this at work (though the teabag should barely be introduced to the water because that powdery, papery shizzle stews so easily), but at home the teabags have been banished to a sealed pot for insistent visitors, and the shelves are heaving with tins of loose leaf glory (always airtight tins, because tea will lose its freshness in no time without them).

So, because tea is really such a wondrous thing, here are ten things about tea; a random collection of fag-ends of knowledge and recommendations of Stuff I Like, because if I don’t share this kind of thing on my blog what, indeed, is the point of having a blog?

1. Although tea comes in different colours, it’s not necessarily a different tea plant. Black tea and white tea, for example, could be the same tea – the latter the new, furry, young tips and the former a fully fermented version. Oolong tea, with its distinctive delightfully musty scent, is part-fermented, and tends to produce a yellow-gold tea. Also, camomile is not tea; it’s an infusion, but no worse for it. Try the real stuff – freshly steeped flowers – for the best, sweetest, no-sugar-needed taste.

2. If you’ve tried Oolong teas and kind of like them but they seem a bit strong, Whittard does a very light afternoon blend that’s quite hard to over-brew.

3. I have a tea Tumblr. The posts from Australia aren’t me, but I shall leave my tea-swilling partner to be an International Person of Mystery.

4. Tea should genuinely be made at different temperatures. You want around 70 degrees (the point the kettle reaches about half an hour after it’s boiled) for white tea, and varying points in between that and 100 degrees for everything up to black. To be honest, this is getting a bit precious but you will taste the difference if you go for it. Or you could just switch the type of tea you’re having if you boiled the kettle and then forgot about it. In related news, if someone ever wants to send me one of these beauties, I wouldn’t cry. Well, I would, but not the sad tears.

5. Gen mai tea / genmaicha is a form of Japanese tea that includes roasted brown rice, which adds a sweet taste and a disorientating scent. It’s worth trying but is definitely quite odd to those of us raised on the milky black ‘English Breakfast’ version of tea.

6. Try drinking your tea black. The flavours are immense, and some black teas – Assam and Darjeeling for example – are really killed dead by the addition of cow juice brimming with sugary lactose. I mean, there’s nothing wrong with a milky cuppa, but you’ll find a whole new appreciation for the flavours of tea if you ditch the dairy now and again. You could also try a flavoured black tea like T2’s delicious Brisbane Breakfast (I did not believe tea with a hint of mango could be nice, but apparently…). They also do a glorious London Breakfast blend which has no additional flavourings, but uses a dash of Lapsang Souchong for a hint of smoke without the slap in the face you get from pure Lapsang.

8. Ditto floral teas, which just taste like dishwater flavoured with perfume. I am not a fan of Earl Grey, Lady Grey or any of the other ennobled Greys. Bleh.

9. Wanting low-caffeine tea late in the day doesn’t have to mean switching to green or white (unless you want to – and there are plenty of good reasons to drink both). T2’s Daintree blend is lovely, as is the Panyang Congou, for getting the flavour of a stronger tea without the caffeine kick.

10. My favourite places to shop for tea are Australian outfit T2*, Whittard, Camellia’s Tea House, JING and any number of random outfits in Chinatown. (*now all over London thanks to investment from Unilever; nothing to do with any of my clients, though, and I loved them before I knew that, so there is no client conflict / sponsorship here).

And as a bonus – and because, as the members of Spinal Tap know, it’s better if you go up to 11 – here are links to two rather different afternoon tea reviews I’ve done: London’s The Pelham and Bath’s Bea’s Vintage Tea Rooms.

And now… anyone for a cuppa? 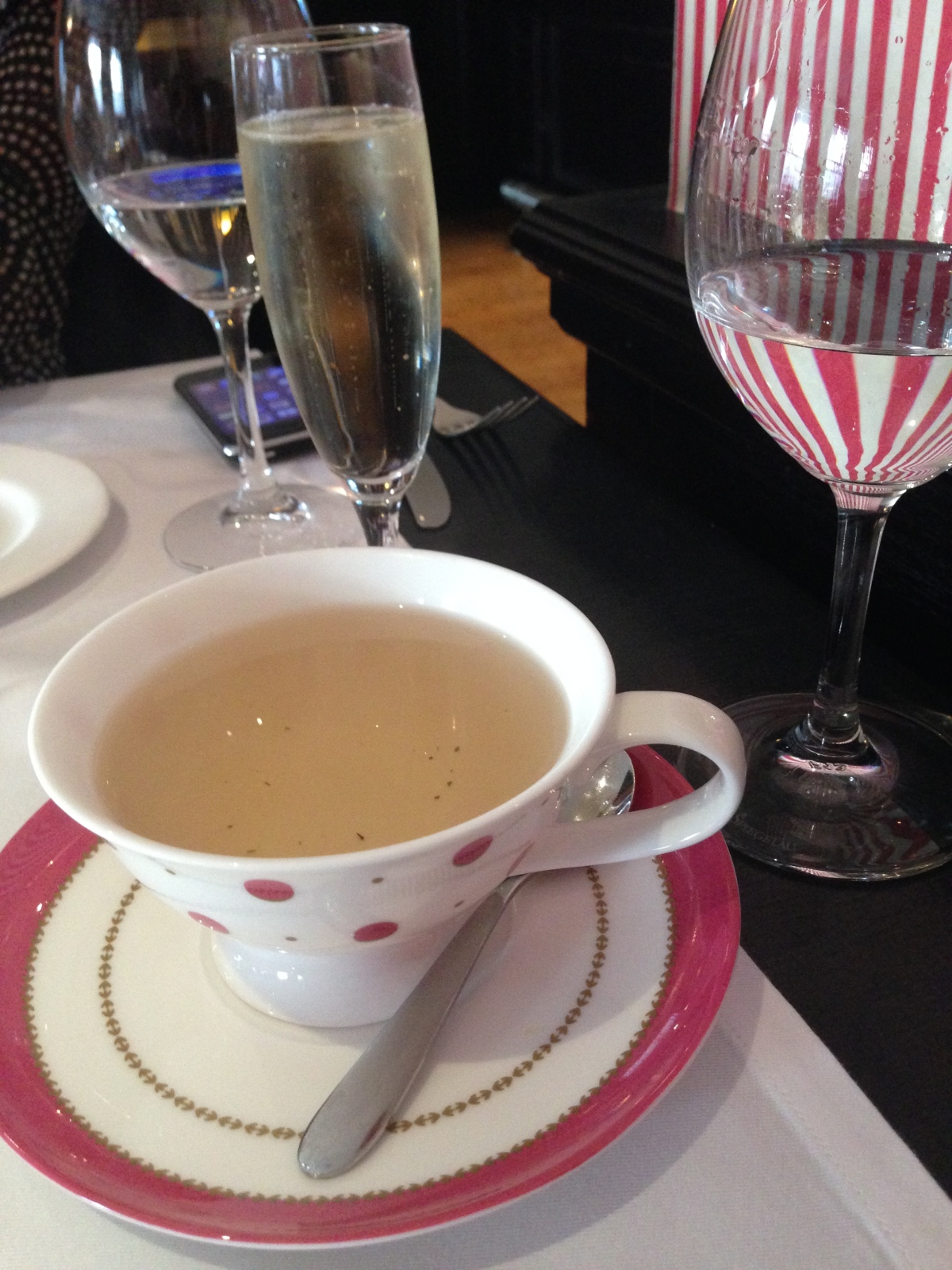 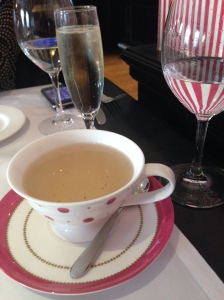 An afternoon tea review right after my last three posts about giving up sugar? What can I say? I like to keep you on your toes. The fact is, I do consider myself to have given up regular sugar permanently, but I’m still open to special occasions. And such a one was a weekend break of fun with a good friend, which included cashing in a Time Out deal for a special Italian twist on afternoon tea at the Pelham.

My friend, K, had been here before for a post-Christmas detox tea, so it seems themed teas are a regular occurrence. The listed value for the afternoon tea in question was £60 for two, similar to the usual Champagne Afternoon Tea, but we paid about half that through the deals site. The setting is the very pretty, tastefully retro Bistro Fifteen, complete with striped wallpaper, mint green chairs, a library corner and dotty Laura Ashley teacups.

The deal included the near obligatory glass of prosecco, which we duly sipped at happily. The server was a bit out of sorts, I think, as she just asked ‘what would you like, English breakfast or Earl Grey?’ and it was only on asking if there were other options that it turned out there was a whole tea menu.

The teas are provided by Camellia’s Tea House – do visit the one in Kingly Court if you can – and included infuriating titles such as Skinny Bitch (ugh!) alongside much more appealing options such as White Peony and a classic white jasmine – no oolong though, more’s the pity. 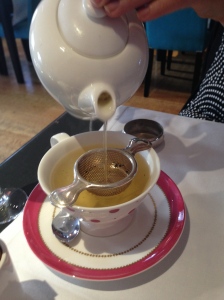 I opted for the White Peony, and K had Beautiful Skin, a greener infusion of dandelion, chickweed and other vaguely mint-scented options. The server then brought the food and dashed off without telling us what was on it, but we quickly worked out most of it and then eavesdropped on our neighbours to work out the rest.

At base were two sizeable and filling prosciutto-stuffed ciabatta rolls, a strange but tasty fried, lemony raviolo of some sort each and four warm, flaky, raisin-studded scones topped with a drippy glaze of marmalade and a garnish of pistachio powder. Clotted cream and jam were provided too, tucked alongside what was described to the neighbouring table as a mango macaron (but tasted for all the world like orange – either way it was chewy and delicious), a tiny chocolate cup filled with custard and topped with a blueberry and a raspberry and a small, super sweet white and milk chocolate pot. Finally there was a spiced biscuit each and beautifully bitter chocolate biscotti.

Though most things looked small and delicate, the scones were extremely filling and the biscotti generously sized and rich, so by the end we were seriously stuffed. Topping up hot water for a second round of tea, we relaxed in the very pretty and relaxed surroundings, surprising November sunshine peering in through the basement windows from the South Kensington street outside. It was lovely to then stroll over to the V&A, my favourite place in London and somewhere K had never been.

K would still be glad to go back to the Pelham again after her second visit, and I was certainly impressed and would be interested to see what other twists on a classic theme they might offer. I’m not sure I’d be too keen to splash out the full amount for a regular afternoon tea, as it is rather a lot even without fizz (£24.50 per person), but the plain cream tea of scones and tea at £10.50 would be worth it for the setting.

Nothing to declare here as everything was paid for by us as stated – simply writing it up because it was fun and I enjoyed it.