Although I’ve never defined exactly what kind of blogger I am – parenting? Disney? Cat? – one of the things that has always been a big part of my writing is food. As a result I’ve been privileged to get to know some of the Great British Chefs team and community, and even blogged for them once or twice.

During Social Media Week, the only thing that could rival the excitement of having been asked to speak in a panel myself was attending GBC’s free food photography workshop.

Not only would I get a chance to hear photography secrets and tips from the brilliant David Griffen – who is responsible for more than 50% of the imagery on the gorgeous GBC site – but I’d also get to go fangirl and be in the same room as a food hero, Marcus Wareing. The menu for the evening was to be provided by the team from his St. Pancras-based restaurant, The Gilbert Scott. As icing on the showstopping cake, it would be at Google’s London HQ, allowing me to tick off another square of my Social Media Bingo card (I need Twitter for the big-name hat trick). 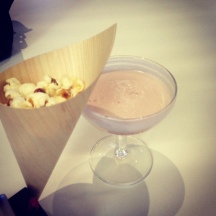 So, what did I learn? Other than the fact that rabbit and prawn pie is not just a thing, but a very, very delicious thing and that gin and lavender cocktails are insanely gorgeous?

Well, how to take slightly better photos than that wobbly cocktail and popcorn one, for a start.

What I particularly loved about David’s presentation was that he focussed almost exclusively on photography with an iPhone or similarly app-happy smartphone. Since for the vast majority of those of us likely to whip out photographic equipment before eating this is going to be the most commonly used device, it was considerably more useful than fancy DSLR settings. It also focussed much more of the classic elements of photography, such as composition and lighting – because to be a better photographer you need an understanding of those much more than you need expensive kit.

Take photos where there is already good natural light. Unfortunately, for many of us this isn’t something we can control; David – quite justifiably – suggested doing your shooting at lunchtime, and simply enjoying your food at dinner time, but how often do you get to go to some great place more than once in order to do that? For many of us, we’re grabbing the opportunity to snap away for a one time only deal; but do try at least to remember the importance of the best lighting you can get.

Try some different apps. David recommend the (free) ProCamera, and it really is quite outstandingly awesome. My two favourite features are the ability to separate exposure and focus (so you can work with the best available light without compromising the composition you’ve chosen) and the rapid fire mode for action shots. The latter I’ve not yet applied to food – just to my daughter, dancing! – but I can see it working very well for cooking shots.

Try several layers of filters before you hit Instagram. I’ve recently become quite enamoured of VSCO Cam, and was pleased to see David rated it too. But his most valuable recommendation for me was Snapseed, a Google app I’d somehow missed entirely and which is absolutely brilliant for correcting brightness and white balance. His suggestion to use the Drama filter is one worth taking. 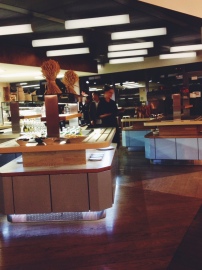 There were many more points raised, but those were the ones that sank in, and that I’ve been trying to apply ever since. Not always successfully, I might add, but that is entirely my own fault.

Once David had imparted his hard-earned knowledge and Marcus had his say (more on this in a moment), we headed off into the canteen (left) to sample more delights and try out his tips, while the man himself darted around offering assistance generously.

The first subject to catch my eye for practice photography was this member of the TGS team, assembling the moreish oxtail sliders that were probably the most praised of the evening’s treats. On the right is one of the original photos (sadly I accidentally deleted the same one, but as it was taken within a few seconds, conditions were extremely similar). On the left, it’s been taken through Snapseed’s Drama filter, had the saturation tweaked and then been run through one of VSCO Cam’s more cinematic filters.

Next I set my sights on the elegant rabbit and prawn pie; the softness of the rabbit, firm bite of the prawns and flaky gorgeousness of the pastry were all nearly enough to make me put down the damned phone and eat, but I managed to get a few shots in… of which this, again tarted up with Snapseed, was probably my best. 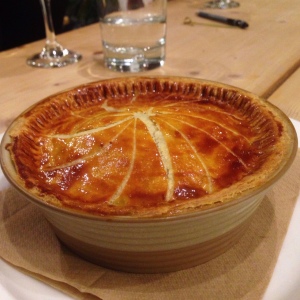 As we all plunged into a shared bowl together, I was quite taken by the look of the plundered dish afterwards, and this time managed to save the original shot, the one after a VSCO Cam filter was applied and then the final one after it had been put through Snapseed (yes, Drama again). 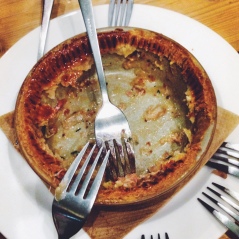 A beautiful Dorset crab, spiced pear and cobnut salad followed, but sadly I wasn’t happy with a single shot I took of that. I focussed my efforts then – photographic and gastronomic – on the Snow Egg dessert.

Having wanted to try this floating island-esque confection since reading about it when the restaurant opened, I was not remotely disappointed by it’s light yet substantial deliciousness. Though I still don’t feel I did it justice, lighting-wise.

And what of Mr. Wareing? Well, he’d admitted with frankness that in anyone less renowned for speaking his mind, would have seemed disarming, that the initial rise of food blogging had taken him by surprise and had scared him. At one point, cameras had been banned in the dining rooms, a move that he now concedes was completely wrong but at the time was meant to try and preserve the atmosphere of fine dining that to him is such an essential part of the experience.

He is not, he confesses, at all interested in street food trends or fun little side projects; he is in the business, first and foremost, of flavour, but also in providing the very best experience he can and constantly overseeing his profitable restaurants. For example, he found the canteen environment quite odd for serving the food his team were providing, because to him the restaurant setting and its menu are so inextricably linked. I wouldn’t be me if I didn’t try to draw a Disney parallel in there somewhere, but honestly I think it’s apt; if Walt’s devil was in the detail, so is Marcus’s.

What was really interesting was how much he was willing to answer and be completely honest about – and he asked questions too, so that at one point I found myself explaining about professional bloggers and blogger outreach (I’m amused to find this made it into GBC’s own account of the evening!).

I left on an absolute high, calling my husband from the street and babbling at him so inanely I’m sure he thought I hadn’t had just one cocktail. But this was the very essence of what such an event should be: fun, educational, memorable and interesting. Hats off and many thanks, as ever, to the fantastic Mecca and the GBC team.

I’m really very excited, as my very first post for Great British Chefs has appeared on their blog today! Being me, I managed to combine social media and food in a post, asking about the future of food programming and the role of platforms like Twitter in developing the competition and campaigning side of things.

I consider myself extremely privileged to have now appeared on four sites I regularly enjoy reading (BitchBuzz, Bea Magazine, The F Word and now GBC), talking about all my favourite things.

And speaking of GBC, campaigning and privilege, have you downloaded the new Summertime app yet? You should, because it’s ace.  One of the things I really love about GBC apps is the emphasis on really beautiful design; I don’t think I’ve ever actually made anything from Feastive which is not a failing of the app’s, but entirely my own; still, I could look at it all day. Plus I think I’ve mentioned before – about four million times – what a Wareing fangirl I am, and his recipes appear on both. But what’s really special about Summertime, apart from its current relevance, is that it was developed in partnership with Ocado which has allowed GBC to donate all the proceeds to Action Against Hunger. It’s priced at £1.99, of which at least £1.20 goes to the charity. Just £36 can provide a month’s supply of therapeutic nutritional products (such as Plumpy’nut, for example) to nurse a severely malnourished child back to health. That’s maybe thirty app downloads – and of course there’s nothing stopping you heading to their website to donate too.

Food! Technology! Non-profits! Blogging! It’s a Christmassy day in August. And now I’m off to write a review of Brave for BitchBuzz, which means two more of my very favourite things in the world: reviews and Disney.