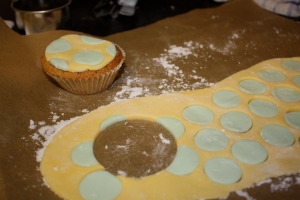 Stamping out the rounds

With Ashley painting the living room and me feeling anti-social, it was time to hit the kitchen. Fear not – I haven’t lost my social media mind entirely. If you’ve been following my Twitter feed you’ll know I recently went to a third sector forum on digital innovation (search for anything hashtagged ‘aquent’), and at some point when I have some better thought out and intelligent thoughts to report on that, I shall blog about them. In the meantime, we’ve just begun work with the CMS for our brand new website, and that’s taking up the majority of my headspace at work.

So… at home. Cupcakes.

The recipe was adapted from some orange and poppy seed cupcakes in Cupcake Heaven. Instead of an orange zest, I slapped in a tablespoon or so of lemon juice. I’d use more next time – I’m not one for subtlety with lemon and it’s barely-there. Otherwise it’s:

– 115g each of sugar, flour and butter plus two eggs and a tablespoon of poppy seeds.

– As usual beat the butter and sugar first, add egg gradually and then fold in flour and flavourings. I used plain flour because I was being absent minded, so I added about 3/4 of a heaped teaspoon of baking powder and a pinch of salt as well to make sure they rose okay.

– 180 degrees C, 18-20 minutes or until lightly golden on top and a toothpick comes out clean.

I borrowed the icing design from a different cupcake recipe in the book, eschewing the creamy topping and orange segments favoured by Susannah Blake for the cupcakes I made (I dare say she wouldn’t mind the liberty if she knew about it).  You use around 2/3 of a 500g block of ready-to-roll fondant icing.

– Divide in two, and dye each half a different colour – two that will go well together. I revisited my pistachio and buttercup colour scheme from the vanilla buttercream mini cupcakes you’ll find buried in the Baking category, and decided I’m switching to paste food colouring cos the liquid’s driving me crazy.

Cupcakes belong in a stack

– Roll them out either between clingfilm or on an icing sugared surface until they’re pretty thin – say 3-4mm. Try and make them as close to the same thickness as possible.

– Then get a small cookie-cutter (any shape, but I’d stick to simple rounds etc the first time) and stamp out a spotty pattern, gently lifting the cutouts and laying them carefully aside. Do the same to the other piece and swap the cutouts, putting them in the holes you let behind.

– Gently roll over again, so that they stick together as much as possible. Now get another cookie-cutter, either the same diameter as your cakes or smaller, and stamp out a spotty-patterned circlet of icing ready to put on your cake. Smear the cakes with a little warmed jam and carefully put the icing on top.

As I didn’t have a palette knife and this is the first time I’ve ever worked with fondant icing, mine occasionally fell apart but I patched them back up again with little fuss or evidence. I stuck to round on this occasion, but intend to use my feet shaped ones to make pink and blue foot-shaped prints the next time anyone I know has a baby! And I reckon some lovely flowery ones will be just right for summer, perhaps in slightly bolder colours.

Anyway, the pictures tell the story if my ramblings don’t. Most importantly, they taste bloody good. I also made cheese biscuits from Nigella Lawson’s Feast with the foot-shaped cutters and they disappeared down gullets before the camera could come out, so I dare say they were yummy too.